Energy poverty is a stark problem in sub-Saharan Africa. Currently 633 million people are estimated to lack access to electricity.

Electrification varies widely between rural and urban areas. In sub-Saharan Africa, the urban electrification rate is 60 percent, compared with only 14 percent in rural areas. At least 50 percent of the entire populations in 38 of the 49 sub-Saharan countries live without electricity — worse off, 51.4 million of 54.3 million people (94.7 percent) living in Liberia, South Sudan, Central African Republic, Chad, Sierra Leone and Malawi do not have electricity. 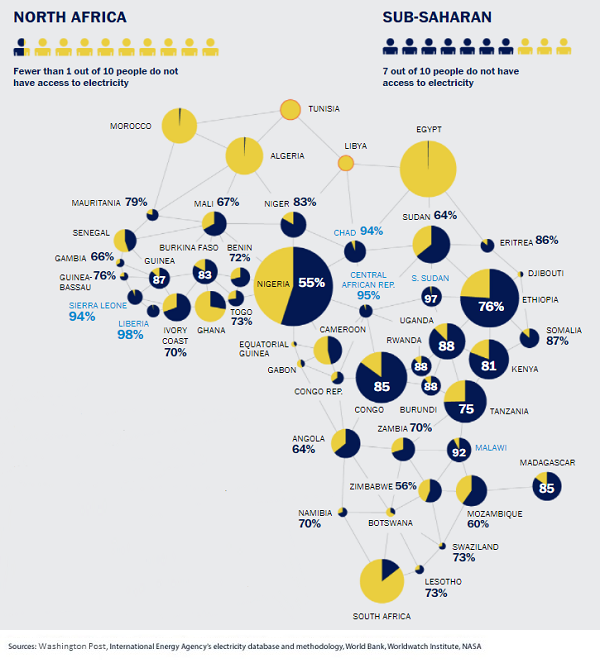 To bolster energy security, reduce price volatility, guarantee electricity access for all and support rapid economic growth in a sustainable manner, the African continent has to face a lot of challanges.

Expanding the electrical grid is the most established approach to providing access to electricity, but high up-front costs and limited ability of the population to pay for a continued supply of electricity, make this solution very difficult to be done.

In the policy environment surrounding energy access recent changes in the price of renewable energy technologies have sparked debate about the best way to do so.

African households tend to use electricity only for illumination, little electronic devices and some cooling, so the use of solar appliances, even if provide electrification on an even smaller scale than SHSs and Mini-grids, therefore result in the lowest up-front cost by providing a rapid transition in household energy economies.

The most active sub-Saharan African countries are:

Nigeria: Although Nigeria is investing a lot of resources towards considerable expansion in the quantity of electric power generated, the energy delivery infrastructure is absolutely inadequate to handle the energy demand of the country. Gradual movement from a fossil economy to one driven by an increasing share of renewable energy has been identified by the country’s Renewable Energy Master Plan (REMP) launched in 2006, which set a target for solar pv by 2025 of 500 MWp; and by the Energising Access to Sustainable Energy (EASE) programme that aims to improve the enabling framework conditions for renewable energy and energy efficiency.

Cameroon: Cameroon’s energy balance shows a clear predominance of renewable energy sources, particularly hydroelectric. Access to power in urban areas is greater than in most low-, middle-, and resource-rich countries in Africa, but in rural areas only 14% of people benefits from access to electricity. With regard to this issue, Cameroon’s Rural Electrification Master Plan (PDER) concerns the electrification of about 660 localities through the extension of the interconnected grids and the construction of isolated systems. The policy goals of the government are to ensure energy independence through increased production and delivery of electricity, of oil and gas (petroleum resources) and to ensure their contribution to economic development.

Senegal: Senegal experienced rapid electricity demand (expecially in the residential sector) increase in the past decade due to economic growth. This high-power demand, coupled with high dependence of the country on expensive imported fuel (in the absence of significant local modern energy resources), have led the electricity transmission sector, favouring the development of off-grid technologies. The potential for efficiency in the off-grid sector is also recognised by the government, and programs have been put in place as part of the current rural electrification program to improve lighting efficiency in rural households.

Other countries like Ethiopia, Benin, Burkina Faso and Uganda are setting strategies and plans to improve rural electrification rate.