Southeast Asia is one of the most promising markets for solar development. Home to dozens of emerging economies with favourable political climates, Southeast Asia is bound to become a cornerstone of the renewable energy revolution. 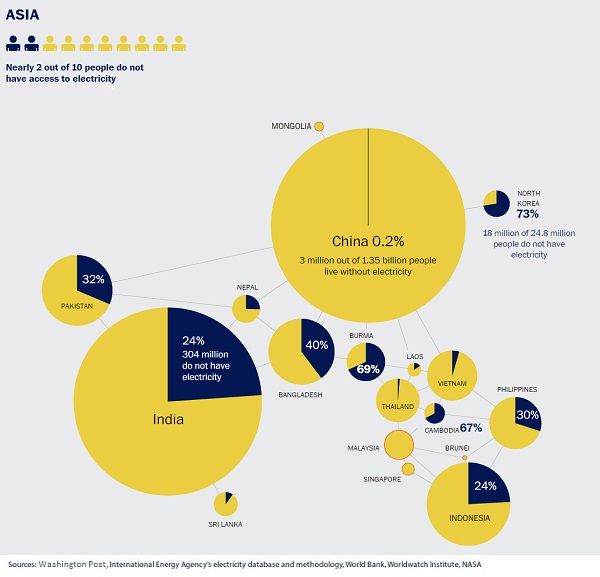 Most of the households in these areas depend on conventional fuel burning that is polluting and damaging, both to the environment and their health, which means there is a great need for clean, sustainable and affordable products to bring light to these households.

Off-grid distributed energy systems using renewable energy could be a solution to this problem, thanks to the increasing availability of small power generation and renewable energy technologies.

South Asian countries, especially India and Bangladesh, have made remarkable progress in expanding grid access in recent years. South Asia has seen an 11 percentage-point increase in grid coverage since 2010, achieving over 80% coverage today. In India, according to the IEA, the household electrification rate grew from 43% in 2000 to 82% in 2016; this represents a gain of half a billion people. Over 99% of people that gained electricity access in India since 2000 have done so because of grid extension.

Similarly, in Bangladesh, grid access increased from 32% in 2000 to 62% in 2014, and utilities connected an estimated 300,000 new customers per month in late 2017.62 Going forward, universal access is expected in most Asian countries by 2030. The only exceptions are expected to be Lao PDR, Cambodia and Myanmar.

The most active countries in Southeast Asia are:

Philippines: The Philippines is an island nation, comprised of over 7,000 isolated islands and an electricity access at only 89.1%, that make developing off-grid solar very lucrative. Emphasis has been laid on reducing the dependence on coal and oil, which are the major sources of energy and promoting non-conventional sources of energy like waste and biofuels. Many programs have been made to boost rural electrification.

Indonesia: Indonesia is made of more than 17,000 islands. 40 per cent of off-grid areas are located largely outside the island of Java and are unlikely to be reached by the national electrification grid. This strengthens the case for large scale usage of off-grid lighting solutions such as lanterns and Solar Home Systems.The government of Indonesia is pushing forward with plans to electrify rural areas of the country using new and renewable energy.

Malasya: Having survived and recovered from two major recessions, the Malaysian economy is among the fastest growing in Southeast Asia and is expected to grow 4.5% over the course of 2017. Malaysia’s energy sector is self-sufficient, largely thanks to its plentiful reserves of coal and natural gas, but Bornean Malaysia has a much less developed grid, which makes off-grid solar more viable.

Cambodia: Cambodia has displayed a rapid economic development in recent years, but the poor condition of its power infrastructure causes frequent power outages, and the high dependence on imported electricity makes energy prices very high. This is an obstacle to local business and reduce the quality of life in the region. To forefront these problems the country’s energy policy is concentrated in the expansion of power infrastructure (increasing electricity production and transmission levels, electrification of all villages), mainly through renewables. To achieve this goal, the government intends to pursue a policy of allocation of funds to facilitate private investment.

Myanmar: Myanmar, also known as Burma, is one of the countries with the worst conditions in the region (low GDP and consumption per capita). Its population is dispersed and many households do not have access to the electricity provided by the grid. In order to provide some electricity, to these households the government is rolling out several small off-grid and mini-grid applications to help rural communities. The investments into the power sector are guided by the Electricity Law and a few detailed regulations, including tariffs, legal terms, environmental aspects, but most of the specific conditions for a project are negotiated under the PPA agreement with the government.