Around five percent of the region of Latam (31 million people) are still without electricity, and in many rural areas expansion of the electric grid may take decades to establish, and may not be economically feasible given the prohibitive costs of expansion efforts in areas such as the mountainous Andes or the Amazon jungle.

The region has three major areas that largely remain off-grid. Firstly there are significant parts of northern Central America – Guatemala, El Salvador, Honduras and Nicaragua, and some of southern Mexico that are without grid-connection. Then there’s the Andean region, comprising parts of Peru, Bolivia, Colombia, Ecuador and Argentina. Lastly there’s the Caribbean.
Most of the people without access to electricity are located in isolated communities or areas with low population density. 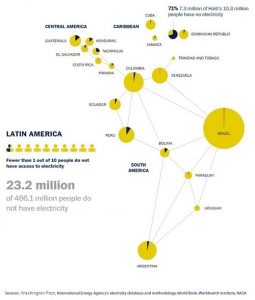 Off grid technology, expecially for Solar Home Systems, is a reliable alternative to grid electricity and carbon-based fuels that is not dependent on the expansion of grid electricity systems.
In Latam Off-grid electrification is still a relatively new sector, that has emerged over the last five years, and now has significant sales and investment. Moreover Off-grid areas in Latin America are now benefiting from projects launched by governments in the last few years (and supported by world finance institutions) to bring electricity to remote communities.

The most active regions that have launched programmes for the rural electrification are:

Peru: The Peruvian government intends to reduce the electricity shortfall throughout the national territory and has launched the “Plan Nacional de Electrificación Rural” that aims to supply electricity to the most isolated populations by installing plants that run on renewable energy resources (in particular a system consisting of photovoltaic panels with storage or RER system – Renewable Energy Resources). The plans began with the installation of 500,000 photovoltaic off grid systems (solar home systems with storage capability), with guaranteed operation for 15 years.

Argentina: The renewable energy program PERMER (Proyecto de energías renovables en mercados rurales) issued by the “Ministerio de Energía y Minería” aims to to extend the electrical access to the largest part of the Argentinian territory. The project includes the supply, installation and maintenance of thousands of solar home systems kits.The International Bank for Reconstruction and Development, a World’s Bank institution, is granting a loan to the República de Argentina in order to guarantee and manage the overall project.

Bolivia: The Political Constitution of Bolivia establishes that access to electricity is a citizen’s right, and the country aims therefore to achieve 87% electricity coverage in rural areas by 2020 and to be fully electrified by 2025, objectives set out in the National Development Plan (Programa Electricidad para Vivir con Dignidad and Programa de Electrificación Rural).

Venezuela: Government launched programmes like “Sembrando Luz” that aim to utilise renewable energy for communities not connected to the grid.

There are also other mechanisms such as remittances, microleasing and pay-as-you go metering systems for off-grid areas that may offer more promising financing options for poor consumers in the future. Pilots promoting the use of remittances for clean energy have already been launched in Haiti and Bolivia. Microleasing efforts have been piloted in several LAC countries, including Brazil and Honduras. Pay-as-you go metering systems are being piloted in Nicaragua.